This is the second part of the Hodderscape Review Project, wherein myself and a group of other bloggers will be reviewing one book per month from the wonderful personages over at Hodderscape. This month’s was awesome and triggered a mass re-read of one of my favourite authors in the entire world – The Shining by Stephen King.

Danny is only five years old, but in the words of old Mr Hallorann he is a ‘shiner’, aglow with psychic voltage. When his father becomes caretaker of the Overlook Hotel, Danny’s visions grow out of control. As winter closes in and blizzards cut them off, the hotel seems to develop a life of its own. It is meant to be empty. So who is the lady in Room 217 and who are the masked guests going up and down in the elevator? And why do the hedges shaped like animals seem so alive? Somewhere, somehow, there is an evil force in the hotel – and that, too, is beginning to shine …

I have a great skill when it comes to questionable life decisions. My favourite is probably the one I made when I was nine, when I discovered Stephen King’s It at a friend’s house and decided that I was so repulsed by the fate of Georgie in the opening pages that I clearly had to read this book in its entirety. If you doubt my commitment to clownian motion, there’s footage somewhere of me hiding under a table from a birthday party*, completely engrossed in It, accompanied only by a wilting slice of chocolate cake.

Twenty years changes nothing. Give me a Stephen King book and I’m lost to the world. 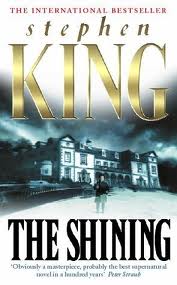 I’m not going to mess about: I loved The Shining, I still love The Shining, and I love the movie too. I don’t need to talk about the movie; others have discussed it vs the book better than I ever could. This is a film I discovered thanks to a particular scene in Twister, by the way. Yes. There is one thing we can thank Twister for, and for a change it’s not Philip Seymour Hoffman. 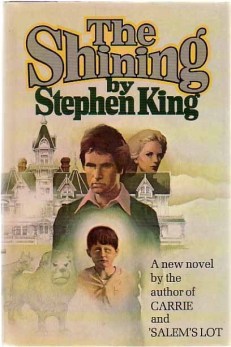 But the book, you guys. It’s about as haunted as a book can be. It’s haunted by the author, the film, the director, and the huge impact it had on popular culture. You can’t help but feel the echoes from every reference you’ve seen, read or heard vibrate through it to the point where you’re not quite sure you’re reading alone. Every re-read you discover something familiar but unsettling, like those times you’re caught between two mirrors and you can see your reflection repeating off into infinity. It’s so, so weird. And oh my god so satisfying.

The first time I read the book I was reading as a horror fan, lapping up the oppressive atmosphere and the hints at the twisted, sordid past of the hotel. This time it’s as a King fan, enjoying how he builds each character up and whittles away at them, exposing fault lines at the same time as exposing them to the dread forces of the Overlook which infect and affect each of them differently. Danny would be an annoying, precocious little kid in another writer’s hands, but thanks to King’s skill with pacing and details, he isn’t; his own father turns on him, he faces the horror in Room 217, encounters terrifying topiary animals, and little psychic Danny is sympathetic throughout. His fear is goddamn contagious because we’ve all been a frightened child, only he’s actually got extreme dark stuff in front of him that few people face – even if you dismiss the supernatural elements, Jack Torrance’s insanity is scary enough. I can’t wait to read the sequel and see how King handles Danny’s problems in adulthood. Cannot wait.

It was a nice surprise to remember that Wendy is so much more of a person in the book than the Wendy of the film (there’s some agreement on this issue) – it lends more of a feeling of the family as a cohesive unit being destroyed than of one man’s descent into supernatural insanity. It’s the single aspect where I feel the book is stronger than the film: the tension over Jack’s madness in the book is fuller, more rounded, where in the film you always know he’s going to crack because Jack Nicholson has villain eyebrows. He totally does. But in the book, King makes everything feel close and real and warm, and Kubrick’s film about terrifying but only slightly supernatural madness feels weirdly distant from a book about dark forces in a claustrophobic space acting on a small and fragile family. The emotional core is strong enough to amplify the fear of everything from the big, dramatic events to the smaller moments that other writers would have ignored (or, say, overlooked. Heh.). It’s a perfect example of the genius of King; a simple moment when the family hears an empty elevator on the move had me put the book down so I could go downstairs for a cup of tea and a break from the oppressive Overlook atmosphere. And who the hell else can make topiary that scary?!

The Shining isn’t my favourite Stephen King, but it doesn’t need to be. It’s Breaking Bad, The Godfather, The Hobbit, Super Mario. The thing that everyone will assume you’re familiar with, the cultural touchstone, the haunted house horror. Even for people who don’t like horror there’s a family story at the heart of this, a dark and brilliant psychological side, which any fiction reader can savour.

Reader, I loved it. And the sequel, Doctor Sleep, sounds so good:

An epic war between good and evil, a gory, glorious story that will thrill the millions of hyper-devoted readers of The Shining and wildly satisfy anyone new to the territory of this icon in the King canon. King says he wanted to know what happened to Danny Torrance, the boy at the heart of The Shining, after his terrible experience in the Overlook Hotel. The instantly riveting Doctor Sleep picks up the story of the now middle-aged Dan, working at a hospice in rural New Hampshire, and the very special twelve-year old girl he must save from a tribe of murderous paranormals. On highways across America, a tribe of people called The True Knot travel in search of sustenance. They look harmless – mostly old, lots of polyester, and married to their RVs. But as Dan Torrance knows, and tween Abra Stone learns, The True Knot are quasi-immortal, living off the ‘steam’ that children with the ‘shining’ produce when they are slowly tortured to death. Haunted by the inhabitants of the Overlook Hotel where he spent one horrific childhood year, Dan has been drifting for decades, desperate to shed his father’s legacy of despair, alcoholism, and violence. Finally, he settles in a New Hampshire town, an AA community that sustains him and a job at a nursing home where his remnant ‘shining’ power provides the crucial final comfort to the dying. Aided by a prescient cat, he becomes ‘Doctor Sleep.’ Then Dan meets the evanescent Abra Stone, and it is her spectacular gift, the brightest shining ever seen, that reignites Dan’s own demons and summons him to a battle for Abra’s soul and survival …

It’s out this Thursday and has a picture of a cat on it. The internet will love it.

“Monsters are real, and ghosts are real too. They live inside us, and sometimes, they win.”

*Someone else’s. And, brilliantly, I managed to slip away while they played It.

2 thoughts on “The Shining by Stephen King”