This is the first part of the Hodderscape Review Project, wherein myself and a group of other bloggers will be reviewing one book per month from the wonderful personages over at Hodderscape. This month we got a great one – The Eyre Affair by Jasper Fforde, an old favourite of mine, and one that I really looked forward to re-reading!

Either the idea of an alterna-England with re-engineered dodos, actual word-munching bookworms that rAndoMlY caPitAliZe wHEn NeaRby and inventors who create contraptions that can catapult you into books sounds like it could be really, really good fun, or it doesn’t. How about some shadowy Special Operatives constantly on the lookout to safeguard literary treasures from rogues and terrorists because they’re just that important? Can I tempt you with a time-travelling parent who pops up randomly to deliver (usually) pointless but entertaining comments in awfully inappropriate situations? How about we go back to that thing about the dodos. Because they go “plock”, you see. 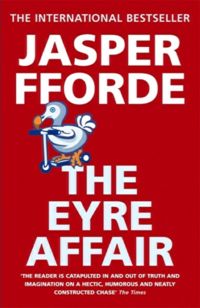 DODO ON A PLOCKING SCOOTER

I’m not going to rehash the plot for you. This is the plot summary. It is a good summary. I would suggest reading the book if you want more detail.

There is another 1985, somewhere in the could-have-been, where the Crimean war still rages, dodos are regenerated in home-cloning kits and everyone is deeply disappointed by the ending of ‘Jane Eyre’. In this world there are no jet-liners or computers, but there are policemen who can travel across time, a Welsh republic, a great interest in all things literary – and a woman called Thursday Next. In this utterly original and wonderfully funny first novel, Fforde has created a fiesty, loveable heroine and a plot of such richness and ingenuity that it will take your breath away.

THIS BOOK ALSO CONTAINS: A CRAZY CAR, WORDSWORTH, AND A SLIGHTLY MAD BUT NICE INVENTOR

Suspending disbelief is all very well and good until you get to books like this one and you find that you don’t need to suspend disbelief so much as bash it over the head and leave it tied up in a dark basement for a bit (but don’t do that, that’s nasty, and you don’t look nasty enough for that). This is a book about the fun inherent in reading, in how enjoyable it can be, how silly, how entertaining – the basic marrow-deep pleasure one can take in the completely illogical, totally weird and entirely fictional things that can occur within a book. I have little time for Dickens and even less for the Brontes, but there’s a love of the source material I’m entirely familiar with that underlies everything in the text, and it’s a feeling everyone with a favourite book they hug to their chest when they finish it will understand. At the same time, it finds humour in all of it, from the classics themselves to the very acts of reading, writing and enjoying a piece of literature. It’s irreverent in a way Hitch Hiker’s Guide fans would appreciate, albeit a little too cutesy to properly compare.

As for problems, it’s a bit of a YMMV matter. Thursday Next is an excellent character on paper (let’s pretend I got away with that) but she’s very dry, a bit distant, and oddly stilted at times. I love her to pieces because I feel as if her voice is a bit of a reference to big name crime whodunnits where it’s all a bit noir, a bit edgy, a bit hard-bitten, but it doesn’t help the romance or sympathy we’re supposed to feel for her character. It does allow for the wryly funny bits to be cripplingly good at times but it’s weird to read a first-person perspective yet feel like you’re observing her not through her own eyes and emotions, but through a telescope.

And Acheron Hades. Brilliant villain if you’re watching a pantomime, a Disney movie, or a 1960s tv episode of Batman. He is dark and devious and has some wonderful touches (especially when it comes to his lackeys – the Felixes are my favourite) but it’s undermined by too much melodrama and silliness to really feel threatening. I just found it all entertaining so I didn’t mind, but there’s no real threat to it, and the Dickens-by-way-of-Wodehouse names scattered throughout the book really made it all feel a bit too vaudevillian in a way that didn’t work with the type of story Fforde was writing. The tension and darkness that should be there instead just feel like shadowy references to something else and not really part of the book at all.

This was the edition I had and lent to someone and never saw again. So upsetting.

But here’s the thing: in a way, it works. It’s escapist, it’s gloriously silly, and, if you want something that doesn’t take a single aspect of itself seriously, it’s enormously satisfying. I first read it when I was in between GCSE and A-Level exams; it took the piss out of high literature in a witty, chaotic, genre-bending way which I’d never read before, and has been a huge influence on my reading and approach to the weirder aspects of genre since then.

It’s a challenge to suspend disbelief and jump right in, trusting that Fforde knows where he’s going, how he’s getting there, and that the wheels of his insane clown car aren’t going to come off when you’re doing 180mph down the Oh My God How Is That Supposed To Be A Thing highway.* It’s not everyone’s cup of tea, and it’s not the perfect book. Do you want your weird and wonderful reads to make sense and be logical the entire way through? Then it may not work for you. It is a stark raving mad literary adventure that cycles between being nearly dark and stupidly funny almost too often to work, but manages to anyway, purely due to the crazy spirit of the thing. It feels very much like an enjoyably readable first book, with a lot of authorial promise to come.

PS Thursday’s dad is THE BEST.

* It’s just past the What The Hell Junction and links the town Oh Why Not with the city You Went Too Far. Like the book. Oh, look, I tried to do a funny.

2 thoughts on “The Eyre Affair by Jasper Fforde – @hodderscape”